Six cars arsoned, among them one belonging to the senate department for the city development 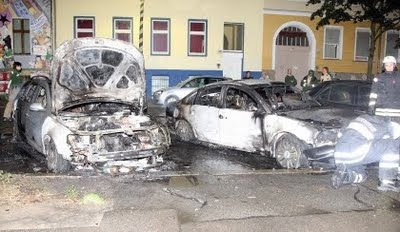 „In the night to the 15.09 we arsoned a car belonging to the senate department for the city development in the Adaltberstr. as also an expensive Mercedes car in a backyard in the area.
Through this we want to give a sign against the unsocial city development and the growing displacement of people with low income and unemployed through careerists and new riches.

One needs onyl to look out of a window: there, where five years ago freespace and green area made the image of Berlin, there are now townhouses and luxury lofts.
The renovation of older building (which one can describe better as a kicking-people-out renovation)
takes place also in the last nice neighbourhood and the streets get filled with chich cafes and expensive cars.
We have to oppose this and show the claws to gentrification.

We do not aim to leave collateral damages behind as it happened on tuesday, but sometimes we have no other choice.
To arson cars is not the onyl mean against yuppies and expensive renovations, but one in the right direction.
What will happen as next? We would like it when inhabitants, the ones who live here since longer time and the ones who „earn a normal wage“ would go in the offensive by themselves.
Isolate the socalled new riches, park your cars not next to expensive ones, they are not welcome here and elsewhere.
Show the city developers that we do not need their plans. 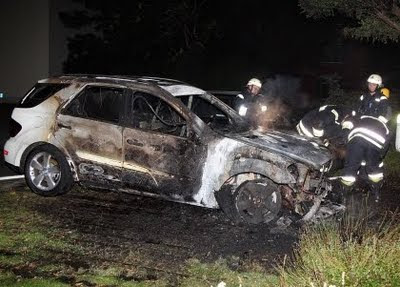