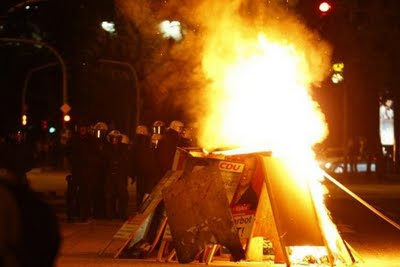 Protests against the NPD Rally

Several thousands demonstrated peacefully against the rally of the right-wingers.
Afterwars, rioters start to throw bottles and stones against the police, lit fires and build barricades, they have been repelled by the cops with watercannons, batons and pepperspray.

7.45pm: rioters throw stones against the cars of the neonazi lawyer Jürgen Rieger, one of the chef of the neonazis-
8.22pm: stones and bottles agains the cops, smokebombs are lit.
8.39pm: rioters attacked a police cars with heavy pieces of the street pavement, the policeman explode a warning shot from his gun!
8.40pm: while the NPD takes place, barricades are being build around and set alight.
9pm: the situation escalates, rioters demolish cars and attack the police.

After the Schanzenfest remeianed quiet daytime, there have been heavy confrontation in the night.
Around 200 rioters attacked a police station with stones and bottles, they used a traffic signal to open up a window and throw fireworks inside
Several person dressed in black attacked a policeman responsible for the traffic and hunted him through the city.

Several shops got damaged, among them one selling electronical facilities from which several laptops have been stolen.
Autonomen set wheels and trashbins in flames, a car got burned.
The police used six watercannons against the rioters.
130 got arrested and 40 policemen injured.