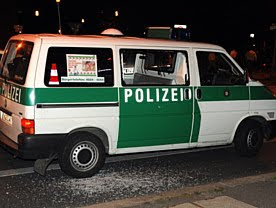 Three police cars have been damaged in Mitte by unknown authors with stones and bottles.
As the police declares, members of the violent antifa and squatter scene gathered during a solidarity party „freedom for the prisoners of the first of may“ in the Köpenickerstr.
They were throwing objects on the way and a person called the cops.
As two cars and one car of the plainclothes police passed by at the alternative project sited in the street (note: the Köpi) they have been immediately attacked.
A group of about 40 people threw stones and bottles at them.
Since it was dark the authors could not be identified by the police. State security investigates because of extremely serious breaching the land peace.