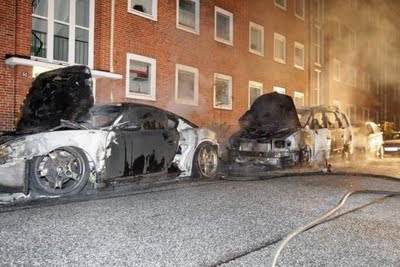 Six cars went on flames - among them, a porsche carrera, an audi 6 and a VW bus used for school-transports.
This is already the third arson attack within three days.
The damage is now about 400.000€.

The police decided to take the first consequences, from now on the helicopter „Libelle“ will look for authors. The helicopter is equipped with a camera detecting the heat, so to give immediate information to the police cars about the whereabouts of the possible authors.