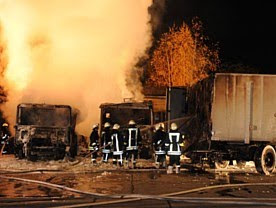 It is 11.10pm on Friday, as one loud noise breaks down the night peace.
Three vans go on flames and a giant smoke cloud rises in the sky.

The criminal office believes this to be a planned an arson attack and they consider the possibility that it might be in connection with the building project of the big airport BBI (Berlin International), which in only a few km away.
On this parkplace one parks also vans of companies involved oin the building of the airport.
The damage amounts to over 300.000€.