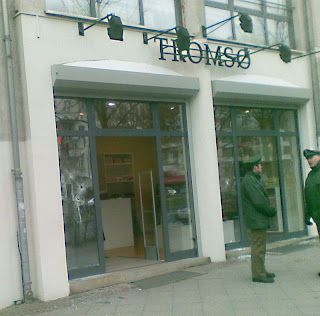 Two Thor Steinar shops have been attacked from masked up men.
Windows got smashed and clothes damaged, nobody got hurted.
The police believe a politically motivated attack, probably from the left radical or autonomous scene.

Around 11am four masked up bike riders passed the shop sited in the Petersburgerstraße in Friedrichshain and threw cobblestones against the windows. Afterwards, a „strong and disgusting material“ flew in reaching the back part of the store. The authors flew away.

Almost at the same time, four other masked up persons went to the other Thor Steinar shop sited in Mitte and spraypainted color inside the store, afterwards they flew away. A 23 years old worker has been cured since she complained about not being able to breeth.
The trademark Thor Steinar is know as symbol of neonazis and rigth wing extremists.
Since the inauguration of the shop, there have been always protests, demonstrations walked to the store, stones and color have been threw.
Lately the shop got his contract cancelled by the house keeper.