Overview of the actions of the „united we stay“ weekend


4 cars torched
- Unknown persons set two cars „Mercedes SLK“ on fire today in the early hours of the morning.
The first action happened around 2am in the Wollinerstr. in Mitte, the second around 5.15am in the Rhinowerstr., Prenzlauerberg.
State security investigates.
-Unknown persons set a car on fire in Treptow. Inhabitants of the Bouchestr. called the fire brigade around 4.45 as they discovered the burning „Range Rover“. A golf parked nearby, got also damaged by the flames. The motivation are yet unclear, state security investigates.
Source: Polizei Berlin 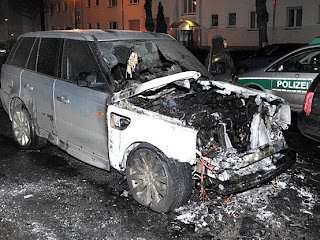 We also document a claim we received:

In the context of the action days of the last days, for the keeping of freespaces and against the displacement of all the ones, who do not want to be displaced, we let a Rover to the flames on the 15 of March, in the district ofTreptow. We consciouly not limited ourselves to the districts of Friedrichshain and Kreuzberg, but we want rather to show how the problem of displacement of people with lower income for the good of the ones, who want to commercialize life, is at the day order in many districts close to the inner city.
This action is in the context of many others which took place before or during the action days.
Just to name a few of them: attack with color and stones to carlofts in Kreuzberg on the last wednesday, smashed expensive cars during the demonstration of saturday, attack on a McDonalds, destruction of police logistic, stinky liquids in bars...
Such actions are all means of our struggle for another society. Towards a life beside dominion.
We stay all.“

Demonstration with 5000 people. Riot in Friedrichshain: cars, McDonalds and a bank got smashed, stones and bottle against the cops, a police car smashed and overturned, burning trashbins. 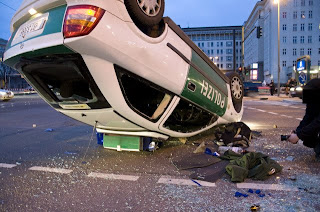 On the 14.03.2009 over 4000 people gathered at the Hermannplatz in Neukölln. They demonstrators want the keeping of remaining ten houseprojects, from the original 100 ones. The demonstration was also against gentrification happening in many parts of the inner city, through which one displaces many part of the population from their social surroundings. Rents which cannot be payed any longer and the complete change of the districts forced many to move tomore affordable ones. The campaign also wants a political solution for all houseprojects and trailer parks. The concept of the demonstration was to have a colorful one, as much as possible, also when on the end the mix came out rather as dark-colorful.
From Hermannplatz in Neukölln, through Kreuzberg and then Friedrichshain.
Simon-Dach.str., Grünbergerstr., Mainzerstr., Scharnweberstr., Colbestr. and a final rally at the Frankfurter Allee to the local municipality.
Along all the route, several solidarious banners got dropped from roofs. In the Ohlauerstr., a small firework got lit and flyern thrown down and on the RAW Tempel there was a fire show taking place, a speech was read.
On the corner Revalerstr./Simon-Dach.str, a banner got dropped from the roof and fireworks exploded, flyers got thrown down.
During this action, a troop of policemen stormed the house in order to arrest the authors of the action, therefore the demonstrators began to attack the police van responsible for the storming, trying to overturn it.
The cops came out of the house and run back in their van, and escape along the street in direction of Modersohnstr., being hitted all the time by a rain of stones and bottles.
From there, they gathered with other cops and came back direction demonstrators, making four arrests.
Big part of the demonstration keep on walking along the planned route and finished the demonstration in front of the municipality.
The rest of the mob which left the demonstration (perhaps up to 1000 people) walked through the district, smashing posh cars, windows of some bars and a tram. They walked towards the newly opened Thor Steinar shop in the Petersburgerstr. At the Frankfurter Tor, a police car got attacked and overturned. 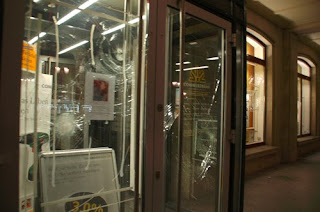 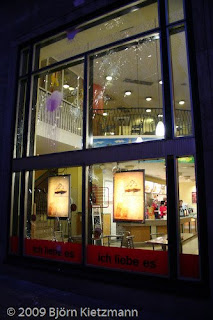 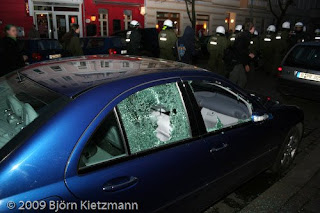 As the mob reached the shop, riot police stormed towards them, they got several stones but managed to chase people away and made a few arrest. A demonstrator was walked over by the cops and got seriously injured, he had to be urgently operated. Police kept on doing a few controls and intimidating people. Police declares to have arrested 12 persons, to have 2 injured cops and that one of the detained got an arrest warrant. 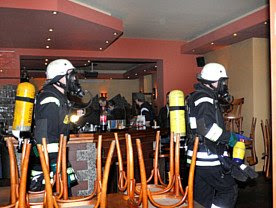 A claim to be found of the ticker of the action days:

„autonomous skunks sprayed charme“
Berlin/Friedrichshain. On the 14.3.2009, several autonomous skunks released their bewitched charme in the Simon-Dach.str.
The socalled Simon-Dach-District got massively bought out from Padowicz and it has been subventioned with the acclamation of the Left party and the Green party. This restructuring displaced several structures and their inhabitants. This shows absolutely clearly, how all parties, no matter how left they pretend to be, are active part of the gentrification process.
An autonomous skunk clarifies:“this action is not against the single ones, but against the entire process of gentrification and the resulting displacement from our apartments, houses and trailer parks.“
For the skunks, the Simon-Dach.str. represents in an exemplary way such a process, where the life costs arise following such a re-evaluation of a district.
„Since we take action selectively and we are not able to attack capitalist relationships in all their totality, the actions meet the ones who active parts of such process of displacement.“
One can believe already, that the autonomous skunks will come back again, if is going to be the next cocktaillounge which will suffer for this, or the expensive car is burning,... we will see.
Autonomous skunks
We stay all!“