Color and stones against Carlofts 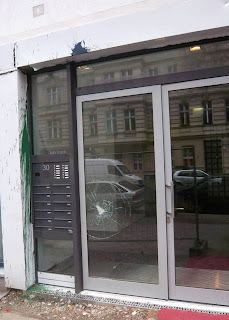 Volxsport (people's sport) against carlofst yuppie shit: in the night to thursday, things kicked off again there.
The security cabin got spraypainted.
As also the security panel.
Walls have been again freshly painted over.
But the smashed windows and the color on the facade are still to be seen.
Here a few picturesfor seeing the carloft (http://de.wikipedia.org/wiki/Carloft) on the 12.3.09.
Pictures: http://de.indymedia.org/2009/03/244001.shtml 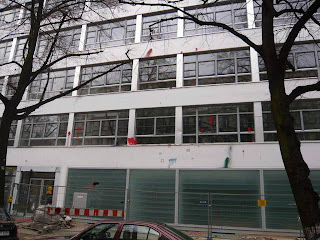 Since the demonstration http://unitedwestay.noblogs.org will not able in two days to pass by there (buuuh!), a few people took a look beforehand in order to show their refusal against the shitty city restructuring. Good this way.
Also: one managed to get a new record for what concerns high paintbomb throwing.
More in the upcoming action days.

We stay all (beside carlofts, shitty city restructuring and capitalism)