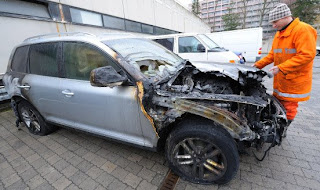 In the night to wednesday, unknown persons undertook an arson attack on the car of the project leader for the building of Frankfurt's airport, Horst Amann.
As the criminal office from Hessen declares, the car has been set on fire around midnight just in front of his private house.

The police does not exclude that the action is linked to planned building of the new runaway.
Amann was too well known by opponents of this project, who could see him at least once drivingwith his car after work in the area of the Kelsterbacher forest.
Also on a few websites, his name was sometimes named – always in connection to a critic to this project.

The police spokeperson declares that „one investigates in all directions“.
But the fact that it could be link to the airport's building remains the main suspicion.
In this case, „this would mean an about-turn for a protest, which until now was quite easy comprehensible“.
It remains the questions for investigators, if one will end with just this attack.