Masked Autonomen ransack the editorial offices of the Berlin Courier. 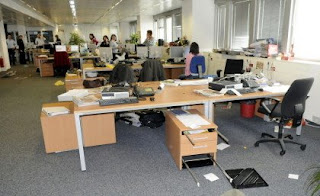 Yesterday afternoon a group of Leftist extremists ransacked the editorial offices of the Berlin Courier. At around 3pm five maksed black figures forced their way into the rooms which were on the 15th floor of a office block on Alexander Platz. They threw around shelves and furniture and pull computers off desks. Afterwards the figures escape from the office. It remained unclear until the evening whether they were able to leave the the building unseen. The police surrounded the building and checked all persons wanting to leave. Many other companies have their offices next to The Courier and the Berliner Zeitung. In the past few days accusations against the The Courier have been made on Leftist internet sites in connection with the „We won't pay for your crisis“ demonstration. 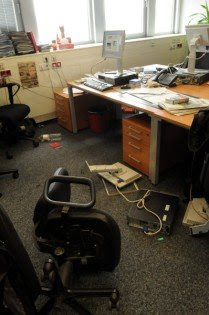