Attacks against Siemens and a cleaning company 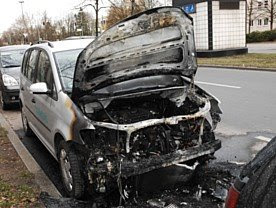 Cars burned again in Berlin. During the weekend seven cars falled victim of presumed left radicals arsonists. By this, the number of burned cars (in Berlin 2009) reached 50, say a police spokeperson.

At first, on saturday morning unknown persons set fire to three cars in Reinickendorf.
Inhabitants noticed flames on two VW Touran, which were parked next to each other in the Lindauer Allee, around 6.15am and alarmed cops and fire brigade.
About the same time, another Touran went on flames in the Brusebergstraße.
Two further cars have been damaged by the flames.
The three cars targeted are belonging to the company Siemens, state security investigates since they believe a political motivation behind the actions.

In the night to yesterday, cars burned in Kreuzberg and Neukölln: a small van of a cleaning company got torched in the Blücherstraße, the cleaning material went also on flames.
Around 4.20am, a van burned in the Ringbahnstraße, state security investigates, believing the authors to come from the left scene.