Spontaneous demonstration for Christian S. / Stones against a Commerzbank 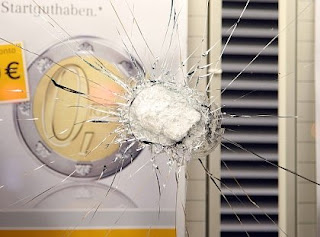 On the night of the 2.3.09 a spontaneous demonstration took place in Kreuzberg.
It directed against the imprisonment of the antifascist Christian S..
About 50 people took part. The demonstration walked around Mariannenplatz and Kottbusser Tor, where a Commerzbank got smashed.
It walked also the Adaltbertstr. and the Oranienstr., where some construction material flew onto the streets. All the time people chanted slogans for the release of Christian S. and distributed flyers.
Inhabitants and passer byers expressed their simpathy.
As the cops came closer with a massiv e presence, we spread around the Heinrichsplatz.
It is to be believed that the prison Plötzensee will keep to escalate the situation in order to provoke further disturbances.