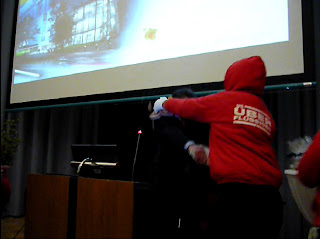 On the 03.03..09 we caked the city major Schwandner in PFL (Oldenburg).
He earned the cake for his politic!
The superfluous ones

A cake for the city major Schwandner

This cake has been well earned by the city major and not only because of his trips to China of in the castleyeards, which are right now on the lips of everybody, but also because of locally enforced political decision, which a re a much worse thing.

At first, for us it is about the restructuring of the harbor and trainstation districts: the city plans a district for new-rich elite, made by offices and expensive apartments.
Extravagant strolling for people with money.
That this thing looks like as a total wrong plan, it is one thing.
The other one is the intention followed by Schwandner and co. through this.
Indeed it is very clear that such a district produces superfluous ones.
People stemming from specific part of society will be displaced from here because of growing rents, through which one will make an exclusive living place for the riches.
So one is seeking a displacement of the „superfluous ones“ from the city image and, above all, it is about profits.
So instead of profit there s a cake for mr. Schwandner...

On the other side, it is about politics enforce against jobless people.
The city act a politic of „spare“ for what concerns help of jobless people, which means also that they get less and less money and have no chance of building themselves a life.

One tries also to criminalize and intimidate all jobless people who self-organize.
Through this one tries to prevent them to take in their hands the ongoing situation.
A further point is that the city actively support the repressive politic acted in the detention center of Blankenburg.
As example, the busses to Blankenburg drive only five time a day.
Migrants pay for a trip (both way) 4 euros, which means 10% of their monthly „pocket-money“ of 40 euros, this even though the city could support them financially without problems.
Also, the city carries on a racist system of coupons, which prevents migrants who are tolerated to get social help.
Through this cake for Schwandner it is not just about his person, but about his role as a representative of this politic, which declares people as superfluous-

He get this cake for creating a yuppie district, for reducing social help, for the existence of the lager Blankenburg and so on – so for a politic, which declares people as superfluous.

For capitalism to be superfluous soon instead of us!