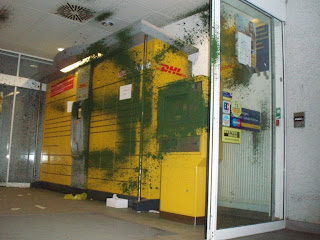 A branch of the package service company sited in the Ritterstr, Berlin, has been painted green during the last days.

There, the doors were opened and green color was everywhere.
Beside this, flyers lied on nthe floor, which clarified the reason of the action.
Therein, one thematized and criticized the cooperation of DHL with the german army and others, as for example the US-one in Iraq.
Also, one found advertisement for a website and a campaign, which has the goal to attack publicly attack the DHL image and raise attention about militarization, civil-military cooperation and war.