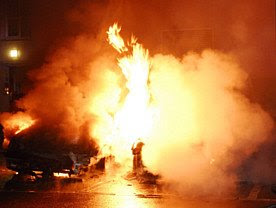 On Sunday night a new arson attack on luxuary cars took place. At around 2am in the morning on Korsörer Strasse a Jaguar was burnt. The fire also damaged a Golf that was parked in front of it. A flaming Porsche was noticed by a resident in Dunckerstrasse at around 3 am. Also here, through the effect of the heat a car standing next to it, a Peugeot, was damaged. It is thught to be a political act, State security investigates.