Bus of the Federal Police torched 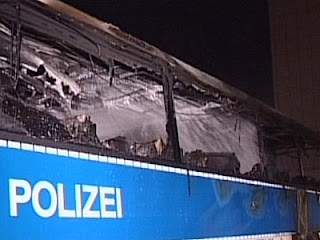 In the night to Tuesday, there has been an arson on the site of a bus-company from Frankfurt.
The damage amounted up to 650.000 euros. The fire brigade got alarmed aroud 1am and as soon as they got on the spot, two cars and two buses were already completely burned down. One of the latter belonged to the Federal Police.

There has not been any risk for people. One does not know yet the origin of the flames; however, the police suspects an arson attack.

Probably the attack is linked to Frankfurt's Nightdance Demo of the 2nd Ocotober (a yearly demo against the German reunification and the concept of Nation: this time it got brutally attacked by the cops shortly after its beginning, whereas people dispersed afterwards causing some ravage in the city).