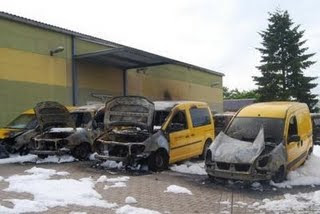 Twelve vans of the german post and her sister-company DHL burned following an arson attack in Lünenburg.

The police speaks of a politically motivated action, the damage is believed to be around 170.000€.
Also the building where the vans were parked got damaged by the high flames.
The speaker of the Post Maike Wintjen speaks of „mere will to destroy, which meet our customers“.