„Häftling“ attacked with stones and color 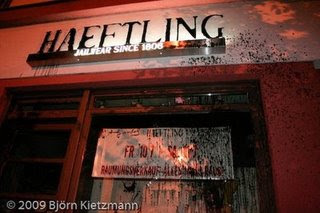 In the night from the 7 to the 8 of July we attacked the clothes shop „Häftling“, sited in the rosa Luxemburg str.,with stones and color.

We want to raise attention on another shop of a label which contempts people, „Häftling“, we want also to link this action to the beginning of the building of the new prison „JVA Heidering“, which began on the 8 of July in Großbeeren, close to Berlin.

About the JVA „Heidering“:
This new prison should host 648 male prisoners, costing more than 118,5 millions of euros and being finished in 2012.
The building of new prisons offer the possibility to the State to imprison even more people, who refuse to undergo the rules of this capitalist society.

Prisons to become holes in the ground!

Link to „Häftling“:
Within the new prison „JVA Heidering“ there will be more than 400 working places planned for prisoners, undertaken by private companies.
The latter will pay prisoners 2-3€ per hour (!), an exploitation of work deluxe, since prisoners who refuse to work are often met by consequences.

The clothes label „Häftling“ is active within this business since 2003 and therefore can produce under ideal conditions, of which other capitalists dream about.

PRISON TO BECOME HOLES IN THE GROUND!
SMASH CAPITALISM!