Riot after the Schanzen fair 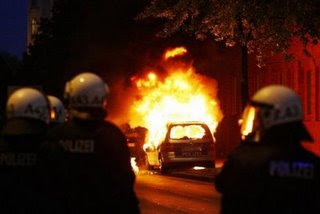 left autonomen and police got involved in heavy street battels for all the night to sunday.
Shortyl after it got dark, the situation escalated, as autonomen start to explode fireworks, threw bottles against the cops and set a police car on flames.
The police used watercannons.
During the riot there have been injuries on both sides, some people got arrested.

Hundreds of rioters attacked the cops, who responded with batons and watercannons, while the rioters kept of building barricades and setting them of flames.
„the throwing was massive“, said a police spokeperson.
„The aggression potential“ of the rioters was higher than in the past. 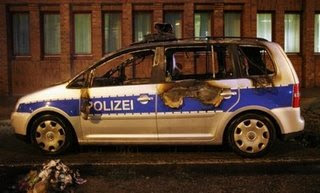 During all the night there have been confrontation with the cops, watercannons got hitted by bottles and all possible ammunitions and barricades built and set alight. 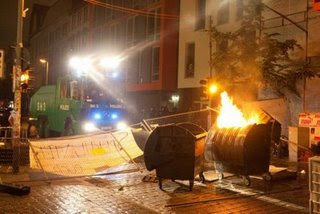 note of the translator: the Schanzen fair is a traditional happening in Hamburg, taking place since 20 years and not registered, organized by comrades and inhabitants together. This year, the city tried to force people to register it and make it „legal“, which has been refused by everybody.
As an answer to the heavy police attacks, on the 12 of September people planned a further edition of the fair.