Revolt in the youth prison 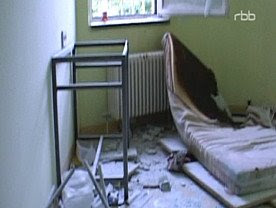 Yesterday night it came to a revolt inside the youth prison of Berlin-Lichtenrade.
Some parts of the prison got smashed and fires were lighted.
Around 7.30am some 15 should have begun to smash furniture of their cells, as also the glass of the windows.
The other 65 took part to the revolt by causing noise.
Only by the intervention of the cops one managed to restore the order.

The senator of justice and prison thugs declared that the reason for the revolt was the weather.
Its humidity should have contributed to warm up the people and brought them to release their frustration, so that the prison got smashed.
As a further reason one mentioned the „condition of a big lack of workers“.
But the real reason why some people who take action against this society of exploitation and oppression by all the means they have are imprisoned, remains unsaid.
As also the daily routine and monotony, which should contribute to break down prisoners and control them, moreover to prepare them towards an industrious life within the daily routine of the process of work and exploitation.
But why does the number of imprisoned people arise, if the criminal statistics published recently showed again how criminality decreases..
Wednesday one will begin with the building of the new prison of Großbeeren – JVA Heidering – which should ease Berlin's prisons.
Our role should be to thematise prison and all other mechanisms which take us our freedom away and conditions our life, as also attack them during our daily struggle against the existent.
This theme does not have to be limited to a few specialists, but of us all, since we aree met by it.
Our solidarity goes to the people in revolt within Berlin's prisons.
We have hopes for an hot summer, so that in all prisons revolt explode and a new number of holes in the ground will appear.

Freedom for all prisoners!
Prison to become holes in the ground!