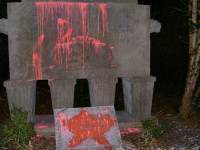 Since the end of December, the two war memorial for the first and second world war sited in Bavaria, München, have been made nicer. Everybody could notice this on new year's eve, since this place is very „in“ spot on this date.

Directly on the Therseienweise there are two war memorials for the soldiers of the first and the second world war. The memorial for the second one is hounoring the tank division of the SS! Now such a memorial has been made nicer shortly before new year's eve. Such a place stays in continuity with the german militarism up until nowadays.

A successful action , for what concerns the 60 years festivities of the NATO in Strasbourg next April as well as the upcoming Security Conference in München.