Confrontation with the police on new year's eve

The riot in Leipzig ended with 64 arrests. From a group of about 150 youths, cops have been attacked with bottles, stones and rockets.
From the Connewitzer Kreuz, an alternative part of the city, there have been always rito erupting during the last years. This year this has been ended quite fast, thansk to the massive police presence.

Two arrest have been made following confrontations in Hamburg.
Members of the left radical scene have been throwing bottles and firecrackers to the cops in the district of Schanzenviertel.
Also in the Hafenstr., bottles and fireworks have benn thrown against the cops. Three cops have been slightly injured and at least two police cars bad damaged.

In the district of St. Pauli, people went off against firebrigades, which wanted to extinguish the fire on a small barricade.
The cops who came as reinforcement have been attacked from around 150 people with bottle, stones and fireworks. Two police cars have been damaged, a few person got arrested.

0.35, at the Mövenpick Hotel (Sternschanze): unknown person threw a bottle full of butyric acid in the ventilation system of the Hotel. At the same time, the wardrobe of the 2000 guests of the party have been plundered. More than 50 pieces have been stoled, there is no trace of responsibles.

In Magdeburg there have been several acts of property damage.
Around Olvenstedter Platz, a few barricades have ben build, cops have been attacked with bottle and stones. 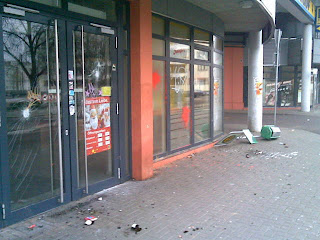 Part taken from the police report:

„(...) aroud 4.40am, policemen discovered that a police car have been burned in the police station of Falckstr. The car has been completly destroyed by the flames; witnesses declared to have seen a person walking direction of the car shortly before the flames went off.

However, there is no trace of responsibles, investigation are going on.“