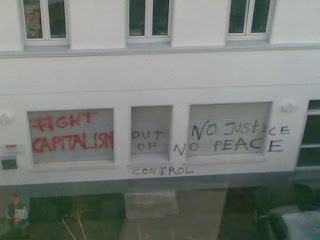 In the night to Friday the 30 of January, unknown persons undertook an attack against the offices Ingo Wellenreuther (CDU), parliament's member, and against the CDU main offices.

The facade and the shutters of the house located in the Waldstraße have been spaypainted, the maindoor got damaged by the throwing of cobblestones, declared Wellenreuther during an interview.

The latter, who at the moment is in Berlin and could not check the amount of the destruction, is horrorified:“this was a clear attack“, declared with consternation.

The authors left behind slogans like „fight capitalism“, „out of control“ and „no justice, no peace“ on the facade.

State security and criminal office believe left autonomen to be behind the attack.
„Such behavior is not acceptable“, declares the city administration.
„Those extremists believe to resolve the political confrontation by using violence“.
One has to wait if the authors will send a claim, half a year ago the same offices have been already attacked.
A few weeks ago there has been also an attack against the offices of Karl-Wolfgan Jägel, member of the regional parliament.

Note for english-speaking readers: there have been several militant actions ongoing in southern Germany within the last months in order to show resistance against the reform of the law ruling public gatherings.

Among other points, these laws de facto forbid black blocs and any demonstration showing an „aggressive, confrontative mood“ to the outside, as much as forbidding „gatherings were people wear all the same clothes, which will be understood as a uniform and therefore forbidden“.

And more and more.

The CDU is the main party sponsoring such laws, which from Bavaria (which approved it a few months ago) are now being discussed in other southern regions, to possibly extend to all Germany.

These information can explain perhaps the arise of militant actions in southern Germany.