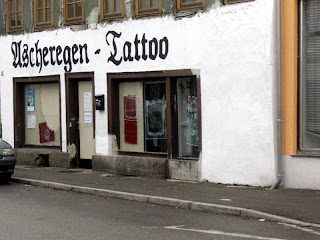 The tattoostudio makes mostly national-popular symbols, such as Thor's hammer, runics, slogan as „Wotan's fighter“, but also clear fascist symbols as a private's head on a black sun.The tattoer:“ my feticism is about images of ancient popular cults, mostly german ones, or also celtic and biblical ones“. Neonazi as customers are not just tolerated, but rather offensively looked for.
There are clear personal connections between the workers and the owner with local neonazi.As example, regionwide known neonazi such as S.R. (functionar of the JN) and several known neonazis have been there.
The dresscode on the inauguration party has been shaped by outfits like skrewdriver, aryan brotherhood, thor steinar, skinheadkultur and black metal, but also more elegant guests.