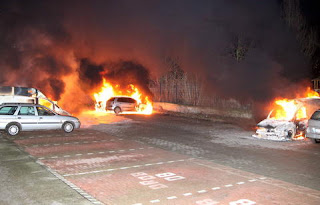 „Attack the handymen of the nuclear-lobby

Before the Castor's transport 2008 took place, several railways line have been sabotaged through hookclaws in France and Germany. Shortly afterwards, 9 comrades have been arrested in France, accused of membership within a terrorist organization and of being responsible of the sabotages.
One of them is still in prison.

It is not a new thing, that in France one inprison activist upon antiterror laws. Already in January 2008, it came to the imprisonment of five persons, described by cops and press as part of the „ultraleftists, anarcho-autonomen“ movement, and they are waiting since then for their trial, in the dungeons of the french justice.

Such a way of proceeding seems to be a strong trend within european authorities responsible for the security issues. Also the german state security works a lot on its terrorist-construction, which newly landed in a trial against alleged members of the Militant Group.
In Greece, 13 youths are sitting in prison since the beginning of the December insurrection, also confronted with the antiterror paragraph.

That is why on the 22 of January we torched 5 cars of the Deutsche Bahn during the action week for the Tarnac 9.

As long as the Deutsche Bahn will keep on offering its railways for the nuclear transport, they will remain always a target of our protest. 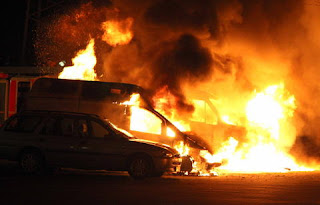