Stones against a CDU-citizen`s büro and the local courthouse 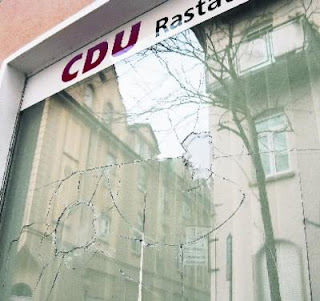 In the night to the past saturday, the citizen buro of the CDU politician Wolfgang Jägel and the local CDU buro of Rastatt have been attacked.
„State security took up the investigations already. Stones have been thrown against the windows and the panels have been stolen with violence. Beside this, a communique have been received from different regional newspapers.

Therein one declares:“The radical left wants to underline with this action, that the aggravation of the law ruling public gatherings began firstly thanks to the CDU and the FDP (...)“.
As the newspapers reported, there has been a similar attack on new year's eve against the buro of a local lawyer. The latter has been often the lawyer of people from the rightwing scene.“

„Rastatt – the buro of the CDU, sited in the inner city, a lawyer's buro and the courthouse have been hitted by unknown person during the last couple of days. The damages amount to several thousand euros. At least for what concerns two of the attacks, the damages would go on the account of „activists“ from the left radical scene.“