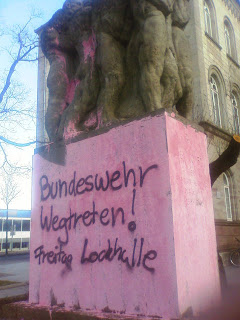 On friday the 20.02.09 one planned a military music show in the Lokhalle of Göttingen.
Therefore, on the night from the 17 to the 18.2 two war memorial have been rendered nicer!

Here the call of the antimilitarist perspective of Göttingen:

„The Göttingen Lokhalle is a regular place for show of military marches of a special kind: the „biggest military music show“.
Around 400 army musicians are awaited for the 20 of February, on top of this thousands lovers of the still alive march-music.
Different antimilitarist initiatives call for this day to a big gratification action around the building opf the Lokhalle and we can even rely on a decision of the Göttinger landcourt: mid of january the process against an antimilitarist of Göttingen ended with an acquittal.
He was senteced a year ago to breaching the housepeace, following the protests against the show at the Lokhalle.
The housepeace, so the court, could not have been broken though, since the building of the Lokhalle.