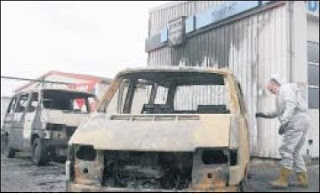 Yesterday night (26.02.09) three special radio cars of the german army burned down.
The amount of the damages reaches about 100.000 euros, one does not exclude a political motivation for the act.

Here an article of the press:

A fire happened on thursday night on a car workshop sited in Burg provoked a damage of about 100.000 euros.
Three vehicles of the german army parked there burned almost to the ground.

A police patrol noticed the fire shortly before 1am on the yard of the car workshop sited in the Zerbster Chaussee and called the fire brigade.
As the latter came few minutes later, two of the three cars were already completly burned.
Firebrigade tried gto get the fire under control, since it was threatening to reach alos the workshop building.
It took them over half an hour.
Officers of the LKA (criminal office) came to check the situation, they do not exclude arson.

„We investigates in all direcgions“, confirms Burg's police spokeperson Ralph Völker.
„From a technical defect to a politically motivated act, one can not exclude anything right now“.
The three vehicles, sited on the workshop for reparations, are three special radio cars.
Police ask inhabitants for cooperation.