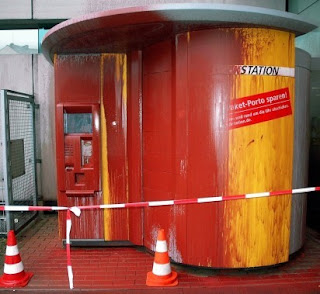 A claim which reached our mailbox:

„In the night from the 18 to the 19 of February, we colored the package station of Wuppertal's main post office with red color, as also we spraypainted the words „Stop the war-logisticians of DHL!“
By this we want to raise attention about the militaristic engagement of DHL, as we also did already in January through the olive-green postboxes.

Following some action in Berlin and München, the DHL published a writing for its workers, where they explained that because of the DHL's cooperation with the german army, further actions could take place.
The graffitis on Wuppertal's post office have been painted away already in the morning.
DHL seems to not wanting to defend its war engagement in the public.

The DHL, 100% property of the Deutsche Post World Net, transports already since 2002 stuff for the german army.
Right now, they tried to apply for the biggest transport job of german history, since the german army wants to delegate most of its basis logistic to a civil company.
Concretely, it is about the storage of army material and transport of war equipment, soldiers, ammunition and fuel.

DHL out of the „war business“!
Prevent the 60 years festivities of NATO in Strabourg/Baden-Baden!