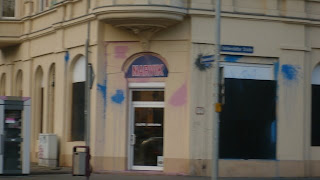 During the last night there has been clearly an color attack taking place in Magdeburg against the neonazi Thor Steinar shop „Narvik“.

Since its moving last January, things got quieter around the „Narvik“.
The new shop is oin the Halberstadtstr. 82, is bigger and protected with massive brown woodplates.
One hosted often public protests and night visits against the old shop.
Both things did not happened until now against the new shop sited in the district of Sudenburg.
One can just hope that more actions will take place in the future against the neonazi shop.