Stones and bottle against luxurious condo-project 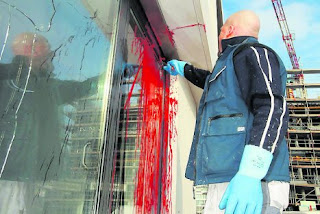 Unknown persons threw stones and bottles full of color against the facade of a house sited in the Dresdnerstr., Mitte.
Since this house is considered being of the upperclass, one can not exclude a political motivation behind it, so the police.
State security investigates.

note for english-speaking readers: this luxurious house built on the border between Kreuzberg and Mitte has been already victim of attacks during the past.