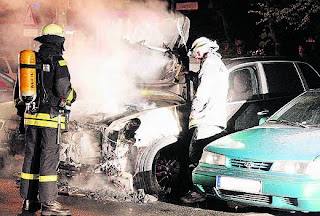 Since the choice of words is so „creative“, this time we publish an article by the Kurier (boulevard press from Berlin).

The blind hate against luxurious cars let fire-devils hitting again: in the Fröbelstrasse (Prenzlauerberg) unknown persons torched a Porsche Cayenne. Around 3.10am a newspaper-distributor noticed the car burning, she called immediately the fire brigade. As they came, the fire already developed on two cars next to the Porsche. While the Porsche entirely burned down, the other two cars had been only slightly damaged.

Since the police does not exclude a political motiviation behind these acts, the local criminal office investigates.

Following 41 political motivated arsons in Berlin only this year, 65 luxurious cars have been damaged.