Actions against the „Anti-Islam congress“

10am: the press-conference of Pro-Köln has been transferred with short notice outside of the inner city, in Rodenkirchen.

12am: Following a rally of around 40 people from Pro-Köln in Leverkusen, 100 counterdemonstrators get encircled by the cops. Bernd Schöppe, one main exponent of the party, get hit by a stone on his head, eggs and color is being thrown by counterdemonstrators. 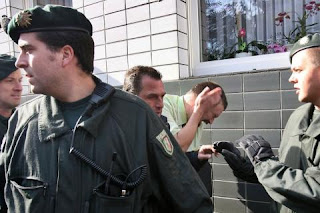 2pm: The boat „Moby Dick“, rented by „Pro-Köln“, gets partly smashed by some stone-throwing done by antifas. The captain leaves the harbour in panic, therefore not all the Pro-Köln attenders manage to jump on the boat.
The latter will look for about two hours for a place to stop by, cops will try to close down the bridges and invite the passengers on their boats. 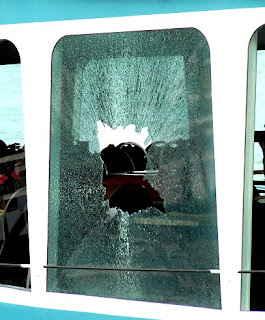 4pm: the boat finishes its tour. The cops forbid the racists to make their planned bus-tour through the city, because they feared further attack by antifas.

6pm: after that the passengers finally landed and got a „leaving-paper“ by the cops, 40 antifas made a sitting blockade and 30 members of the clown-army visited the copstation.

8pm: bus and taxidrivers will refuse all day long their services to the racists.
The meeting of the latters, due to happen in the Yachthafen Porz, although falsely presented as the birthday party of some company, got discovered and the racists got kicked out.
They got kicked out also from the rooms they had rented in the Hotel Holiday Inn. Meanwhile, over 2000 antifascists gather for the night-demonstration chanting „Now we begin!“.

10pm: the demo walks without troubles through the city.

12pm: at its end, several paintbombs will be thrown at the cops and a large portion of them against the immigration office, many fireworks will be lighted.
Afterwards, a spontaneous demonstration walks towards the innercity, several windows of posh cars get smashed and about 100 antifas get encircled by cops.

Through fire one stopped the S-Bahn traffic which was supposed to drive the Pro-Köln functionaries towards Köln. The police want now to proof if the autonomen are responsible for carrying this attack.

8am: several opponents of the congress tried to squat during the night the Heumarkt square, where racist were due to host their rally, but this has been prevented by the cops who had several riotvans on the spot, enclosing the area.
However, nobody got arrested, fireworks have been exploded and windows smashed.

10.30am: counterdemonstartors begin to gather at the Heumarkt, blockades begin to happen, black blockers start to gather, while the police show their presence also with horses and watercannons.

11am: the situation begins to get hot, first acts of violence: counterdemonstrators try to destroy several fences used by police to block the streets, some people attacked the cops also exploding fireworks, one cop will be hit in the face and will have to be medicated. In one other spot there are confrontantion between counterdemonstrators and police, the former trying apparently to steal one gun of the latter, police will make large use of batons. 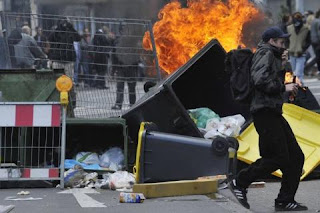 12.10am: the police forbids the racist rally at the Heumarkt, since „the security of the ihnabitants carries the highest position“, one will declare in the press release. The police spokeperson declares that „one would have make use of a massive police operation in order to secure the population, therefore the question if the planned rally has to be take place by any means necessary“.

6pm: 6 injured cops, 15 arrests and about 500 counterdemonstrators taken in custody – this is the first hand evaluation of the anti-islam congress.
The cops encounterd many difficulties in order to get the situation under control and prevent riots. Around the Heumarkt, where the racists were supposed to host their rally, trashbins have been set on fire, windows got smashed and bus stops got trashed.