Car of a neonazi destroyed 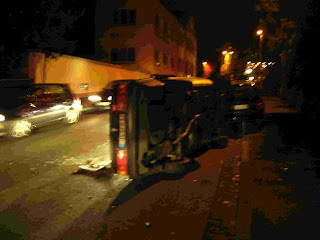 Around 20 people from the left spectrum destroyed the car of person involved within a right-wing party. Damages amount around 500 euros. Three suspects got arrested but soon released, the criminal police investigates.
Around 20.15pm, several functionaries of a right-wing party met up in a pub in the Mühlstrasse. Clearly, leftists got to know about this meeting.
They met up in black clothes and masked up in front of the place and smash the old car of one of them. After destroying its windows, they turned the car upside down.