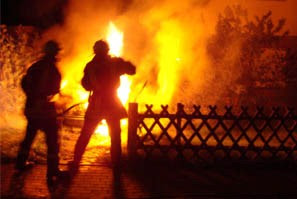 Rostock 8th September
Already in the night to sunday, two arson attacks took place which were clearly directed against right-wing extremists. The cars of the MdL Lüssow, as well as of one other worker of the NPD (the neonazi party) have been completly destroyed. The police believe also a political motivation behind the fact and is investigating. The two arsons happened almost simultaneously, one in Elmenhorst and the other in Rostock/Gehlsdorf.
Bilger Lüssow did not become very beloved by antifascists not only because of his affiliation to the NPD, but also through his financial engagement in the shop „East Side Corner“ (neonazi shop in Rostock which has been militantly targeted dozens of times already...), preventing therethrough its already foreseen closure.
As the police tells, there have not been any risk for people during the attacks.
The NPD has another opinion, declaring that one would have been ready to kill people.
Source: Indymedia