Color against the party offices of CDU and SPD 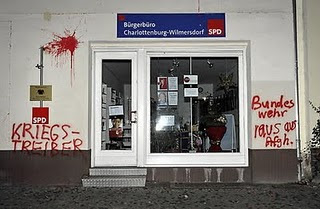 In the night to the 4.12 some war opponents threw paint against the offices of the member of the parliament for the SPD Petra Merkel as also against the one of the CDU politician Hans-Georg Wellmann.
Slogans against the german intervention in Afghanistan have been also left behind.

The following claim reched us:

„on the 3.12 the parliament decided about the intervention of then german army in Afghanistan.
The parties CDU, SPD, FDP and the Green party are with the majority for prolonging it.
We found out the offices of two politican who voted for its support and attacked them exemplary with color and leaving some graffitis, in order to clearly mark the ones who are in favour of this war operation and are responsible politically for the murders in afghanistan.
Surely by this action we do mean as well the FDP and the Greens.
Concretely the action targeted the office for the citizen in the Goethesstr. 80 (Charlottenburg) of Petra Merkel (SPD) and the office for citiuen in the Clayalle 349 (Steglitz – Zehelndorf) of Karl-Georg Wellmann (CDU).

The war in afghanistan produces thousands of deaths.
This for pushing forward the economical and political power interests of the western states.
It is about securing the transport routes for the rwa materials and the geostrategical position of this very land.
State and capital always went over bodies for reaching their profits.
Against this we put in pracitice our resistance, which does not let herself be limited by the penal code.
We salute the arsons against cars of the german army as a concrete form of disarmament, the troubles being created at info events of the german army and many other actions by which one oppose with decisiveness to war and militarism!
With our action we want to give a sign against german war politic.

Against war and capitalism! There is no secure back-up area!“