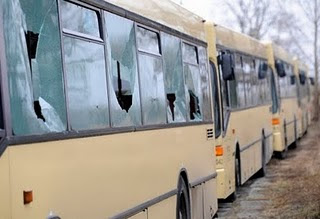 Probably left extremists smashed the windows of 23 buses in Johannisthal.
The company had been named in a left extremist newspaper for offering its buses to the german army.
About 150 windows have been smashed.
The company organises the transport of recruits and guests to the yearly swearing-in ceremony of the german army on the 20 of July in Berlin, as reported as well in the left extremist newspaper „Interim“, which published a list of all companies involved.
The police warned all the companies about this, so this very one as example put his buses away from the streets and rented an hall.
Fire extinguishers have been also emptied in most of the buses.
The damage must be over 50.000€, declared the chef of the company.