Arsons and attacks against the police, the federal criminal office and the customs police 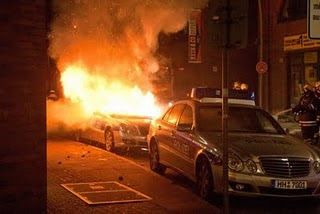 Burning police and customs cars in Hamburg, paint and molotow cockatails against the federal criminal office in Berlin – unknown persons made this night the german security organs to target.
Left extremists called beforehand for an „action month“ for December. 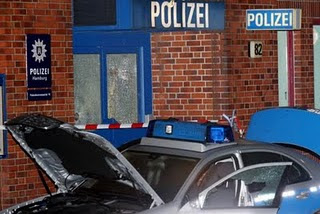 In Schanzenviertel in Hamburg several masked up persons smashed several windows of a police station there.
A police car was arsoned, the other one got damaged by the flames of the other one.
In Berlin – Treptow some paint and molotow cocktals has been thrown against the office of the federal criminal offices.

The police does not know anything about the authors.
Dozens of policemen looked for them in Hamburg without results.

In the same night two cars of the custom police got arsoned in Hamburg. 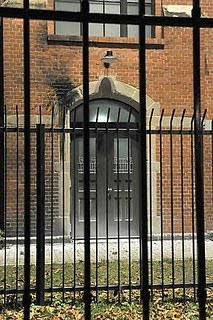 the following claim about the action against the federal criminal offices has been sent to us:

„on the 6 of december of the last year alexis had been shot dead by the cops in athens. To remember him and the following revolt, on the night of the 4 of December we attacked the BKA (federal criminal office) in Berlin – Treptow with molotowcocktails, stones and paint.
The BKA is a decisive motor in pushing the coordination among the different european security autorithies, with the clear aim to destroy any social struggle and they are also responsible for the farce trial and the long sentences handed against axel, oliver and florian as alleged members of the MG (militant group).


Our solidarity goes to all the ones who began to attack the dominion of state and capital, who bring their rage into the streets and began to counterattack, as also to the ones who, because of this, are held as prisoners inside the state's dungeons.
Just to name a few of them:
tobias, rigo and yunus, held in pre trial detention in moabit and hakenfelde
alfredo, christos, ilias, giannis and the alleged members of the militant group „conspiracy of cells of fire“, held prisoners in greece. Freedom for all.


The action is to be understood also as a response to the ongoing repression and the eviction of the Brunnenstr. 183 – we will keep on pushing the price higher.