The „Republikane“ are fighting a battal for their political survive.
Above all, in the region of Baden – Wüttemberg they try to oppose their defeat through a massive presence during the election campaign.
However, this is met by resistance.
A nice saturday afternoon with sunshine, market and racist propaganda – that's the way how the racists if the „Republikaner“ had planned in their mind.
Just stupid, that on saturdays the 23 of May they chose as place the Bihiplatz in the red Heslach for their hanging around!
Therefore it happened, what it had to happen.
A passer byer express his unsatisfaction, smashing their infostand and throwing their propaganda on the ground.
Since their boss Rolf Schlierer disappeared just in that moment from the infostand and therefore was not present in order to have a political confrontation, a further racist received his earned portion of pepperspray.

A night impression with flag: 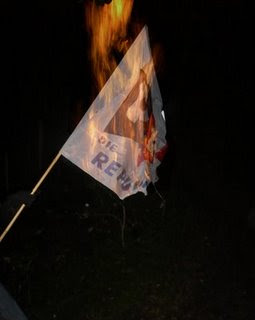