10.20: several hundred antifas occupied the trainstation of Köpenick, where one expect many participants of the NPD festival to come through.

12.08: the chief of the police operation declares: counterdemonstrators put burning tires on the railway in the area of Treptow.
Also, they sabotaged a signal box in Köpenick, which caused the disruption of the S-Bahn traffic for what concerns the eastern part of the ring (note: the talk is about the circular train system active in Berlin which makes a circle aroundthe town).

12.10: a demonstration against the nenazi festival leaves the trainstation.

12.20: part of the demonstrators get masked, the black bloc tries to reach the NPD central offices from the back 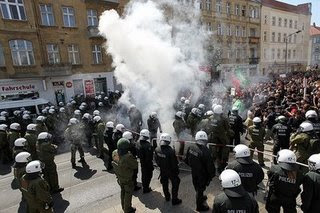 12.29: After one inhabitant showed the hitler greeting from his balcony for several minutes, he get attacked with stones by demonstrators. 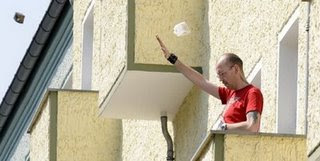 15.04: the counterdemonstrators start to leave Köpenick about 1000 of them are still there.

Eggs full of color to the national minister of finance. 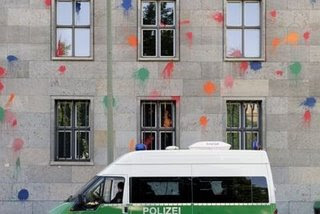 During the Mayday Parade a color attack took place around 16.20pm against the minister of finance. About 60 socalled eggs full of color have been thrown by demonstrators against the building.
The demonstration, with about 4000 people, kept on walking without problems.

Revolutionary 1 of May demonstration

The demonstration start to from herself.
The federal police is present on both sides of the demonstration, keep the distance as soon as the first stones get thrown. Also the vehicle with the camera get further away towards a security distance.

After all speeches have been read and the band finished to play, the demonstration starts to walk. On its front, a black bloc, mostly with masked up people who walked in chains.

Mariannestr./Skalitzerstr. (at the petrol station)

At the petrol station the demonstration meet the first bigger group of cops.
A very loud firework get exploded and afterwards a rain of three dozens of stones fly on them. The cops escaped behind their cars, clearly taken by surprise, one can see a few of them getting shields.
The intensity of this direct action, which takes place from the demonstration itself, is of higher quality than the one of last year: shortly after Glietsch (note: the chief of Berlin's police forces) got encircled by demonstrators, few stuff got thrown to the cops, but the demonstration start to disperse afterwards.

Short time of unsureness: the people in the backlines are surprised by the action and also among the more militant ones there is a bit of hectic.
Such an attack did not happened since many years. The situation get good again as soon as the demonstration gets compact again, walking towards the Myfest (note: festival organised by the city with the neighbors and different associations, in order to prevent the night riots in Kreuzberg).

During the Myfest, one encounters different reactions: many cheer at the black bloc, other describe them as „chaoten“ and „crazy ones“.

The cops cannot act in the Myfest area, they would escalate the situation too much.

At this crossroad it comes to the first, massive attack by the cops, which however cab be fought back without arrests. There is a confrontation of about 10 minutes, 50 cops with batons and demonstrators with stones stand in front opf each other. The cops are with their back on a wall and cannot do much against the rain of stones (memories of 2 of June 2007 in Rostock come to the mind again).
They have no reinforcement here or cars to bring arrested people away, therefore thy just limit themselves to a fast attack without arresting people.

After a massive rain of stones for the cops, the demonstration walks further again pushing away the cops, some of them fall down and cameras shatter.

Here the demonstration stops for a while, clearly there are negotations taking place about a route change.

Cops are here positioned mostly together on the street and get a lot of stones and other stuff. Around the firebrigade station, a group of cops is again with their back on the wall and get massively hit by stones.
Two police car, one car of them for reulating the traffic and one responsible of evaluating the videomaterial are all of the sudden in the middle of the demonstration.
Windows get broken, stones fly.
Some participants get also hitted, since some are throwing from the 20th line.

As for the first time the cops try to storm from the Reichenbergerstr. they got hitted by many stones and pushed away, a thing wich will happen agains about a dozen times for the next 15 minutes.
Hardly any arrests, they use massively pepper spray and gas.
On the other side, it came to use of several molotow cocktails.

After half an hour, all police units divided around Kottbusser tor, they stormed the stage of the concert and finished it.
Like the previous years, there are few burning barricades, but the cops get the situation under control. Autonomen start mostly to leave the place and are replaced by hooligans, visitors of the Myfest and so on.
The largest part of the arrests of the day begins here.

An audi get burned around 1.15 in Prenzlauerberg.

A BMW get arsoned in the Zehlendorf, a mercedes and a twingo, which are parked next to hit, get also damaged.

In the Ebertystr, Friedrichshain, an inhabitant called the firebrigade around 5am, a mercede burns and damages a skoda parked next to it as also a further mercedes.