A line of attacks against Berlin's neonazi scene

„During the last two nights we attacked several neonazi structures and persons of Berlin through coordinated actions
Among others we smashed the windows of the important neonazi pub „Zum Henker“ (Schöneweide). 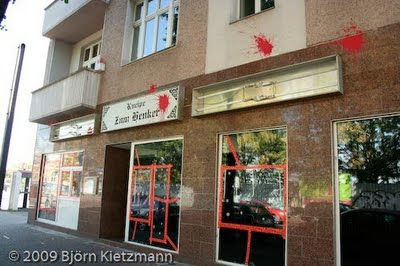 We found the necessary information for launching the attacks in number 4 of the publication „Fight Back“, thanks for the good work of research. (note: in this publication one can find detailed articles of neonazi structures and persons from Berlin neonazi scene as also important adresses where to visit them).
Neonazis are putting selfconsciously out of any democratic discourse by the employment of their despicable views in regard to humanity, therefore they do not have any right to gain the Rights of a society based on liberty.
Therefore militant actions are an effective and legitimate mean in order to stop their work.

-Location damaged
Seven windows got smashed and five paintbomb thrown at the facade of a pub in Niederschöneweide, the pub is called the „Zum Henker“ and is well known as a gathering point for neonazis. State security investigates.

A „Renault Espace“ has been arsoned in Neukölln. The car belonged to a representant of the DVU (extreme right wing party)State security investigates.. 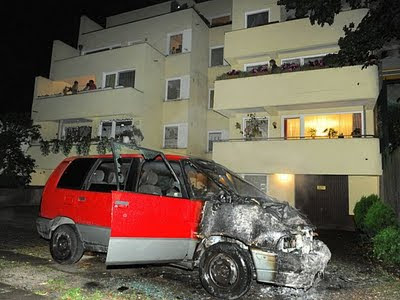 -Property damage
Paintbombs have been thrown against the private house of a representant of the DVU party in Lichtenberg.