Arson against a former deportation center 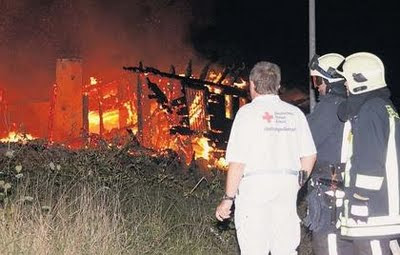 A builiding hosting formerly a deportation center falled in flames, burning to the ground.

The building was the former sanitary section of the deportation center.
The police is sure it was an arson attack, otherwise they would not know „how the fire would have developed“.
They found also signs about how one wanted to break in the main building to set it in flames.

From an article on Indymedia: in the deportation center of Zweibrücken, which disposed of 60 places, sat around 800 people per year from 1996.
Already back then several of them were released after a few terrible months since their imprisonment was considered a mistake.
The others got deported with violence from where they escaped with good reasons, because of necessity, intimidation and suffering.

The deportation center got closed in 2005 after which one concetrated people in a bigger deportation center, the one in Ingelheim (close to Mainz), with 150 places,
Since its closure several discussion tooked place about a new use of the buildingl such like transfroming it in a prison for elderlies, but none of those proposal got much resonance.