Arson attacks against police station and private cars of the cops 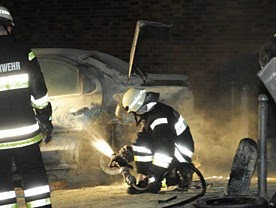 „In the early hours of the 22 of August 2009 we fed the pig sty of the LKA (note: criminal office) in the Budapesterstr., Treptow, with two molotow cocktails.
There are enough reasons for this, we just name here a few:
Alexandra and Christoph are still held in prison because of the lies of the pigs of the state security, under the accusation of having burnt cars,
the trial which is going to begin soon against the prisoners of the first of May in relation to the accusations of attempted murder,
theodoris undertakes a hungerstrike in greece prisons since the 10 of July, used by the pigs as a scapegoat for the december insurrection,
in all Europe more and more people are being shot dead by pigs: Dennis in Schönfließ, Alexandros in Athen, Florian in Krems, Tennessee in Regensburg, the youth in Biel and much more..

We are happy about the growth of attacks against the coppers and we show us in solidarity with all the ones threaten by repression and have to face it everyday.

Also we would salute very clearly if the pigs would further self-scrap themselves, as it happened the last night.

Fire and flames for every State!
Pigs sty into fire!

Source: Indymedia
Press: Berlin cops in the eyes of fire chaoten: private cars of policemen have been set alight.
After an action of vengeance by the „AK autonome pig-flu“, there have been arsons attack at a buildinf of the criminal police as also on private cars of policemen in front of a police station.
Clearly the reason seems to be the decision on Friday by the court of not letting out of prison two suspected car-arsonists.

Several emergency calls went in at the police station in the Pablo-Picasso street, Hohenschönhausen, so that several police cars left the station.
This was clearly a mean manoevre to deflect them.
In fact the cops came back without having achieved nothing.
Instead, a Ford and an Alfa Romeo burned in front of the police station, both cars belonging to cops.
A third cop car gets damaged by the flames.
State security investigates.