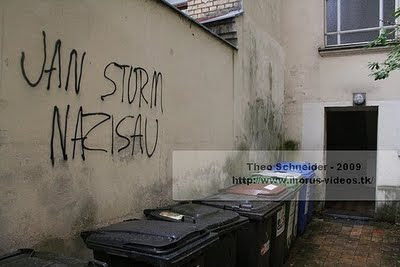 Antifa storms in the night the house of the known neonazi Jan Sturm in Neukölln.
Only a few days ago another neonazi had been outed.
The actions are probably in eonnection with a neonazi attack against a cultural center in Neunkölln.
Around 25 masked up antifas stormed the house of Jan Sturm around 0.15am.
The latter is member of the city district parliament for the NPD and number 4 for the land list of NPD for the national election 2009.
Antifas smashed the door of the house and set a bin alight in the yard.
Slogans against him have been spraypainted around.
Only a few minuted later the police came as also members of the criminal office, who were by chance in the area because of another operation.
However they could not arrest anybody.

Already on the last saturday one outed the neonazi activist Thomas Vierk, the other member of the city district parliament for the NPD in Neukölln,

These actions seem to be related to an attack against a cultural center in Neukölln, undertook a week before by neonazis.
They smashed the windows of the center „Society for a friendship with Chile“ and left NPD stickers behind.