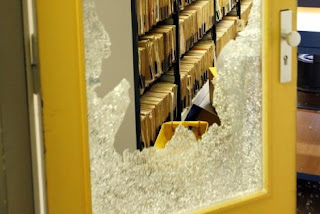 The criminal police looks for possible connection with the „climate“ and „anti-racist camp“, the inner senator, from the CDU, asked the police to surveille all district-offices by now on.Around 12.35am the devastators began: they stormed the immigration-office department, where by that moment there wasn`t any public attending. They used a prepared fire-extinguisher full of red colour to mess around, they threw the files on the ground, destroyed telephones and computers. The spokeperson of the district-office Hansen:“a worker has been slightly injured by the pieces of glass. All the five workers are totally under shock and have been send home. One does not exactly know when the department will be able to open up again, the damages are supposed to be higher than 20.000 euros“. The cops intervened with a large presence and arrested two italians (26/40) – they are supposed to have taken part in the destruction. The other authors escaped on bikes.

Following MOPO-informations, the arrested 26 year-old man is already known in relation to violent-political acts. (update: the 40 year old person got out fast, the other one came out the day after and will face serious charges.)