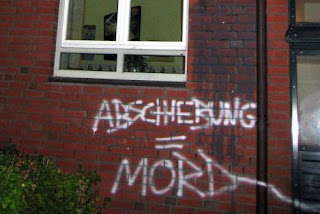 Few days before the beginning of the anti-racist camp in Hamburg, few militant actions took place to remind the ones involved within the deportation-machine and racist politics, that they are also a possible target.

The press and the cops are getting crazy and called the organizators of the camp to take distance from the attacks, which hasn't been done at all but rather they put the focus on where the real violence come from, from the State side, as the organizators declared through a press-release recently.The government of the city and the cops declare to carry on a „no-tolerance“ policy towards the upcoming camps from the 16 to 24 of August.

We document here (partially) an article from the official press:

„Hamburg under alarm!"„Attack the deportation-city of Hamburg!“That is how a communique begins, which came reached yesterday our newspaper. A „Militant Antiracist Group against the Imperium“ (MAGGI) takes responsability for the attacks of the last days. The police is now having 52 patrols more during the night in order to arrest possible responsibles. One continues in the communique „between the 11 and the 13.8 we have done few actions to salute the beginning of the anti-racist and climate-camp.“

Besides the already known attacks against Ralph Bornhöft, the chief of the immigration office, and one of his workers, Gunnar Eisold (SPD), the writers take responsability for further attacks. (ndt: their private houses got hitted by stones and bottles full of colour, graffitis against their racist politic have been left behind) At the house of Carsten M. In Lünenberg, who is responsible of the department „repatriation“, one smashed the windows. In the communique the responsibles wrote that they would have liked to „burn is car“ as well. But for a case, the person left for holyday with his car shortly before the attack. The authors describe the three persons as „desk-perpretators“, accused of being hardliners within the racist politic of the city of Hamburg. One continues „The hard actions of the immigration office remains the same despite any change of government. This will remain the same also under the present one“.

Within the communique the authors take responsability for another attack which was not yet known, a property damage in Pinnenberg,where one destroyed a car belonging to a company from the NRW-region which has been involved in building deportation-lager for refugees. The communique ends with „Shut down fortress Europe!“.“

Moreover, in the night to Monday a heavy-good vehicle belonging to the company „Dussmann“ has been torched in Hamburg-St Pauli. The „Dussmann“ company, already target of few attacks in the past, is responsible for selling food in deportation-centers and „repatriation“ centers and making a business out of it.