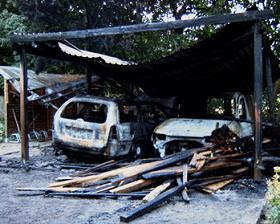 Following an arson attack against two cars belonging to a NPD (german neo-nazi party) member in Biesenthal, the state attorney from Frankfurt (Oder) investigates because of „suspicion of arson“.
There would be a communique which would prove the political motivation behind the actions. As main reason would be declared that the NPD member would use the cars for the upcoming NPD election-campaign (ndt: in september communal-elections are due to happen in Brandenburg, Berlin's regions, a campaign started from antifa groups, autonomous people and citizens is running against the entry of neo-nazi in the local government)
Moreover, the authors claimed also responsability for two other actions (graffitis and color) aganst two pubs in Königs Wusterhausen and Schönow.
As reason they gave the fact that neo-nazis would use these places to host their events.
Therefore the state attorney investigates as well because of „property damage“.
The police declared that „autonomous groups from Brandenburg“ took responsability for the actions.
In the night to tuesday the parking-place as two cars of the former NPD regional-representative burned down. His private house was enough faraway, therefore there hasn't been a real risk for the family who was asleep. One does not yet know the exact amount of damages.