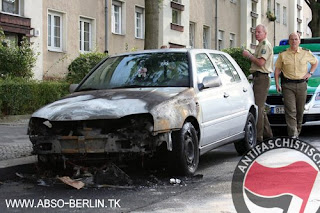 Berlin 25th August
Around 800 people took part in the protest against a neo-nazi demonstration in Berlin-Neukölln under the motto „No to the neo-nazi demo - Together against racism and exclusion“.
500 people took part in a counter-demonstration organised by left-parties and antifascist groups.
Few hundred antifascists got close to the neo-nazi march and screamed slogans against them. Attempts to block their demo had been stopped by a huge amount of police forces, made of 800 riotcops. Few groups managed to build some barricades with trashbins and set them on fire. A car, which was clearly recognizable as belonging to a fascist (having also a huge sticker of the neo-nazi trademark „thor steinar“) got burned down.
Source: Junge Welt